Driving cross-country, and part way back, I couldn’t help but take note of unique and amusing road signs along the way. I’ve sorted through and attempted to place them into categories followed, of course, by my thoughts on each (please note that when you scroll down, not every sign has its own picture). For those of you who have driven through different states you’ll undoubtedly recognize some of these. But to me, many of them were new or unusual. So without further adieu:

The first time I passed this type of sign, I was like, “Whaaa? Do they mean like a rest stop?” Then a mile later, there was literally just a pullout for a covered picnic table by the side of the road. I’d never seen just a table in the middle of nowhere. I mean, I guess it’s cheaper than building a full on rest stop with bathroom facilities and such. But I wonder if these “roadside tables” really get much usage. I think I’d just eat in my car and be on my merry way.

Ok, this sign can be useful in the right place. But frequently seeing it along a vast highway in the middle of nowhere was a bit perplexing. Were they having issues with people parking on the side of the road out here? So much to do and all… carpool into work 150 miles away anyone? Park for fun to play with the cows beside the road? Park to take scenic pictures of… yeah, your guess is as good as mine. Seriously, is it really necessary to state that parking out here is only for emergencies?

I frequently saw this sign along one of the more hilly highways in California. I wasn’t sure if they were telling the trucks to go slow, or if they were warning other vehicles that there were lots of slow trucks. Either way it seemed rather unnecessary. The semis seemed to max out at about 50-mph going up hill so they certainly didn’t need a sign telling them to go slower (on a 70-mph road). And I definitely didn’t need a sign telling me that there were numerous semis impeding my progress. Maybe in more rural areas where the trucks were few and far between it might be a helpful alert to take care around the corners. But these signs were on a major highway where you could literally see a long line of semis in the right lane. So my response to these signs was more, “No S#%! Sherlock,” than, “Oh, thanks for letting me know.”

I first noticed this on the major highway entering Oklahoma, and I guess it’s not that unusual. But residing and mostly living in Western Washington, it’s not something I’ve really encountered. For Seattleites the minimum speed is usually dictated by the flow of traffic. No one’s trying to drive their tractor down I-5. 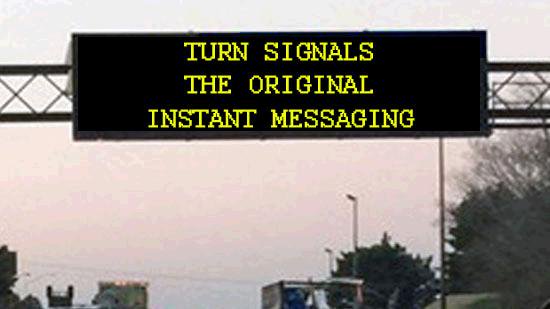 Haha, cute. So there’s nothing more important to post here… like drive times to the closest cities or anything?

So I guess I’m in the South now…

I’m thinking billboards in the middle of nowhere must be pretty cheap. It was amusing to see the number of billboards drawing your attention (which is not hard on a straight, boring highway) to various upcoming stops. Just like it’s impossible to drive from Phoenix to El Paso along I-10 without seeing signs for “The Thing”, it’s nearly impossible to drive I-40 from Albuquerque to Amarillo without seeing the 72-oz steak challenge. As a smallish, and fairly healthy eating female, I was like, “that sounds disgusting.” But to Jeff, who loves meat, it was not only a lot of a good thing, but a challenge as well! And you had over 100-miles to formulate your plan to consume such an obscene amount of beef! But, rest assured, I answered with a resounding, “No.” We managed to hold off until Oklahoma City to eat moderate sizes of pristine cuts at a higher quality steakhouse.

I should have taken a picture but we passed it so quickly: There was literally a billboard, in the middle of nowhere that wasn’t just blank, or plastered over, or faded away, but had the single word “Nothing” printed on it in big letters. Seemed fitting. Though I’m hoping that whoever placed it there did so for free.

Again, I wish I had turned around and taken a picture of this one. It was a large hand-painted sign wanting you to buy, what I’m assuming was, corn, but had an unfortunate spelling error. I can just imagine, mom to son: “Billy, you had one job, paint the sign to advertise our corn! Don’t you know how to spell corn?!” Then she smacks him upside the head with an ear of corn.

This was New Mexico’s version of a high wind warning along the highway. Other states chose “Caution high winds” or “Gusty winds” but I like the Land of Enchantment’s more existential take with the wording. Do they exist or do they not? I think, perhaps they do, though maybe not at the moment…

I saw this sign along a highway in California and understood it to be the ubiquitous warning for a slippery road, or caution to not skid out. But then I was confused because the road I was on literally looked like this:

Every few miles there was one of these skid signs and I was like, what the heck is going on? Then finally I realized that they were placed just before small bridges, presumably over drainage areas. So the sign was really trying to warn me that the upcoming surface could be icy, if it were, in fact, much much colder out. Each state had a bit different verbiage: “Watch for ice” or “Bridge may be icy” all of which were a bit amusing while driving in the summer with temps above 90 degrees. In my opinion, the most accurate sign (Virginia, I think) said “Bridge ices before road.” Thank you. I will watch for ice when appropriate, but not today sir, not today. 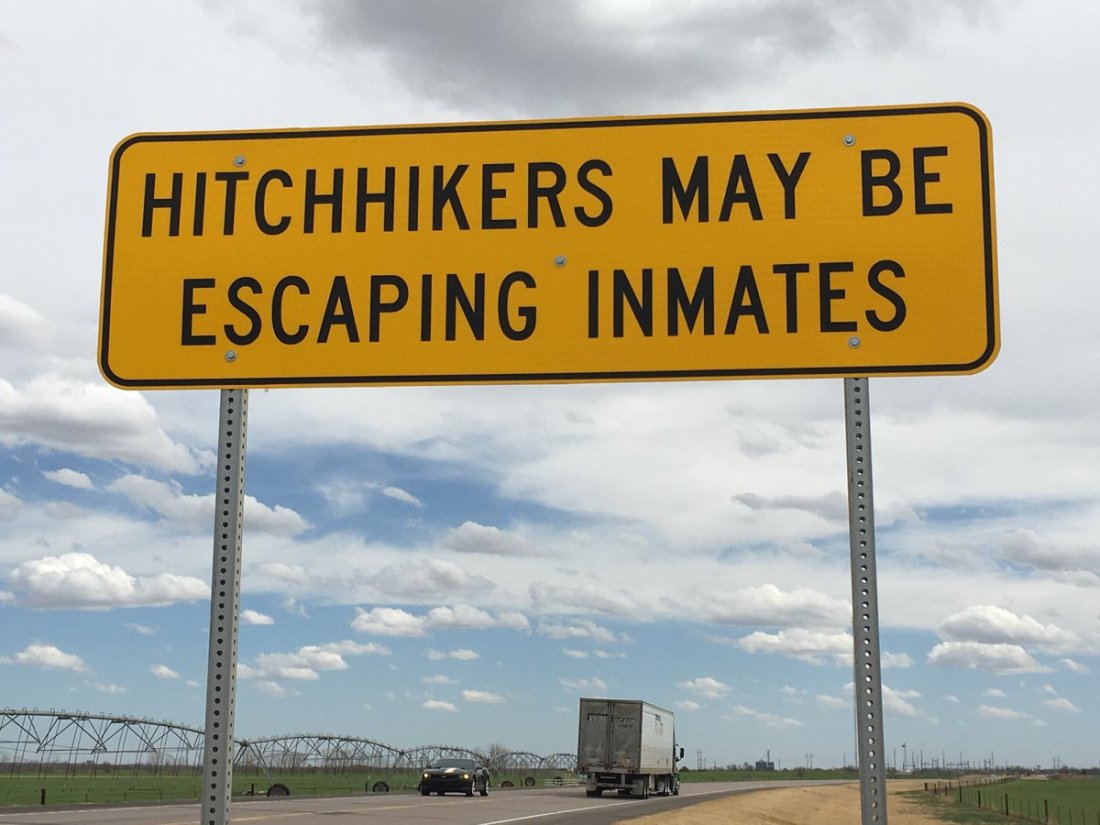 I’d seen signs in other states that said “Correctional facilities: Do not pick up hitchhikers” but I like how in Oklahoma they don’t mention whether or not there’s a prison facility around. And they also don’t tell you not to pick up the hitchhikers either. I mean, as someone who doesn’t pick up hitchhikers, I generally assume anyone in that position may be a convict, regardless of their proximity to correctional facilities. Best to err on the side of caution right? Oklahoma’s a bit more nonchalant, they’re like, “We’re just letting you know… but really, your discretion if you want to give them a lift.”

I had to include this one, even though it was not technically a road sign but along the sidewalks in Virginia Beach. I’m assuming it means no swearing. Is there really a city ordinance against public swearing? Was this a major problem? How/is this even enforced? So many questions. I don’t usually swear, but now I kind of want to, just to see what happens…

So, those are the highlights of signs I found to be amusing. On an unrelated note, I’ll give you a quick update of where we’re at now:

We arrived in the Memphis-area last Wednesday after being delayed in Norfolk for a few extra days due to some military processing hold up. We are settling into a third floor 2-bedroom, 2-bath apartment complex in a quaint suburb about 15-minutes from Jeff’s work at the Navy base and about 30-minutes from downtown Memphis. We’re still reliant on GPS to navigate most places (the roads around here don’t go very straight and/or they change names frequently), trying to adjust to the gross heat/humidity (I’m not sure how well this is going to go), and trying to connect with other Tennesseans.

View all posts by dmango