It’s been just over three weeks now since we’ve taken residence in a quaint Memphis suburb. I thought I’d focus this entry on some not-so-subtle differences I have noticed thus far. Sure, most of these have not been overly surprising, but it’s one thing to know, and another to experience and adapt. So without further ado, enjoy these pictorial representations (my attempt at drawing and some images from the Internet) of our early encounters here in the Mid-South:

The purple star represents our humble abode. This is the only picture that I didn’t bother to include Seattle’s version because I have enough faith in your knowledge and imagination that you can infer that the density of coffee places and churches may look just a tad different around homes in the Seattle area. One of my first thoughts driving around our new neighborhood was, “ Man, there are a lot of churches.” Not a bad thing, just an observation. And then one of my next thoughts, “Where are all the coffee places?!” I mean, I can make coffee at home, but I like the ambience of sitting in a coffee shop, quietly reading or writing, or (if we actually knew anyone in the area) chatting with an acquaintance. How do people study and meet in the area? Do they actually, gasp, go to each others’ homes? Either that or they meet at the church around the corner.

A less foreseeable change for me was the lack of paper and/or reusable bags in grocery stores. In Seattle I’m used to toting around my reusable bags, having the grocer neatly pack all my foodstuffs, then carrying 2-3 largish bags easily into my home. Welp, in this neck of the woods not so. After leaving with a dozen or so delicate plastic bags after my first trip to the store, the next time I asked a grocer where the reusable bags were. She looked at me funny then asked, “What type are you looking for?” I paused, I thought there was essentially only one type. “Uh, the kind for your groceries,” I replied. “I don’t think we have those” she responded. And that was that. My Facebook friends informed me that this was not unusual outside of the Seattle area and offered a variety of recommendations. After several trips of struggling up two-flights of stairs to our 3rd floor apartment with plastic bags draped all across my upper body (we all know that taking more than one trip is not an option) and accumulating a hoard of plastic bags, I have since invested in some durable reusable bags that I pack myself. My last couple trips to the store have, thankfully, looked more like the picture on the left again.

Well this one is pretty self-explanatory. Seattle rain is cute and dainty. Memphis rain doesn’t mess around, if it decides to grace you with its presence, you’ll likely be drenched within seconds. Seattle gets a bad rap for its rain even though it has less annual rainfall than a lot of other major cities (34-inches per year compared to almost 54-inches in Memphis) but it’s the constant grey and drizzle that people remember. Memphis will get its rain over in an onslaught and then a few minutes later, or a few miles East or West, it might be nice and sunny. 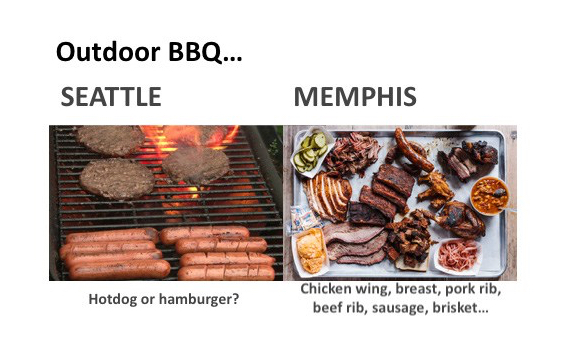 So in Seattle if I’m invited to a “barbecue” in a park I think, ok, there will probably be some hot dogs and/or hamburgers, their buns and condiments, some bags of chips, pop, and cookies, that seems to be the standard menu. Occasionally they mean a real barbecue, but then they usually specify what type of meat (probably only 1-2) they will be cooking. I’m not sure what they would call serving hot dogs and hamburgers here in the Mid-South, but probably not a barbecue. We were lucky enough to be here during Jeff’s work’s annual summer barbecue and it was no joke. They had a competition and several of the entrants arrived days earlier with their campers to start slow-cooking their meats. We didn’t get to taste all the competitive entries, we had a more generic section for the non-judges or common folk. But the generic section did not disappoint. They had at least as many different kinds of meats as pictured in the photo above, then multiple types of potato salads, macaroni salads, coleslaws, homemade cakes, pies, pudding… now that’s a BBQ people!

So, in Seattle I almost always prefer running outside to inside. Seattle’s temperate weather, plethora of maintained sidewalks and trails has spoiled me. Running year-round on trails like Lord Hill’s in Snohomish, is so refreshing and free compared to the confines and monotony of the treadmill. But in Memphis in the summer I soon discovered… 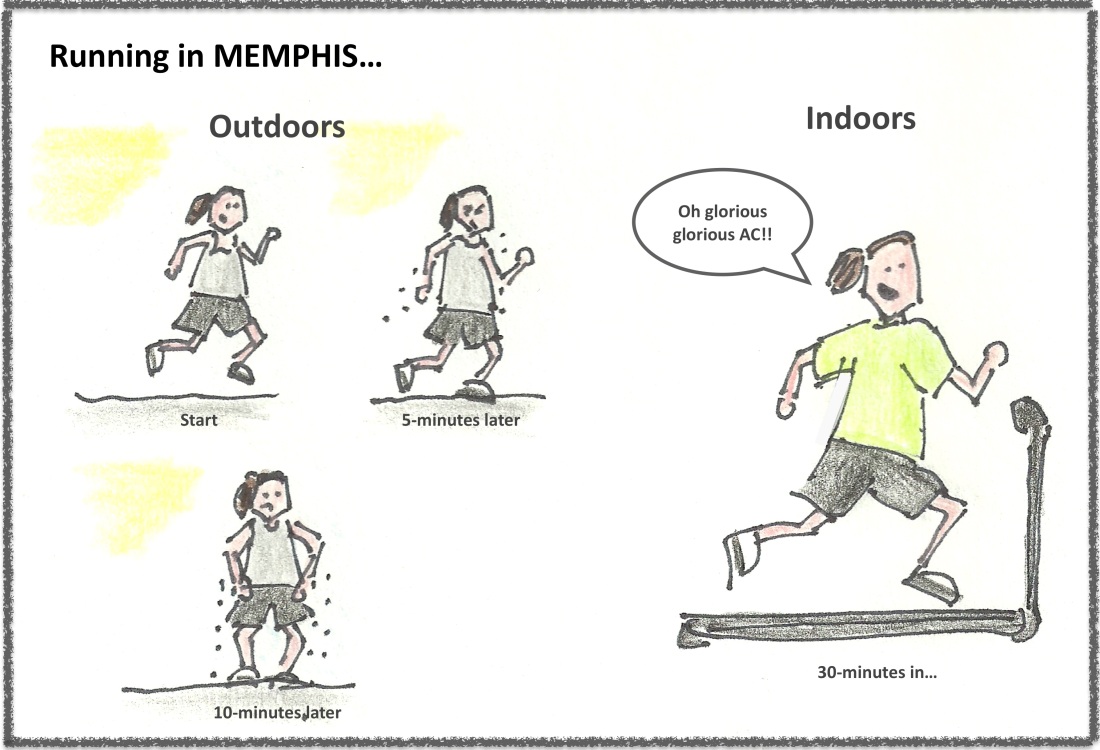 Running outside is not a pleasant affair. Actually, it’s the polar opposite of pleasant (also, it’s the opposite of polar, haha… sorry). We arrived during somewhat of a heat wave, so I waited a few days to even attempt to run outside. Finally the temp decreased to the low 80’s and the sky clouded over, so I decided to buck up and get outdoors. Well, it went about like the picture above. After ten-minutes I was so sweat-soaked that my perspiration was running into and stinging my eyes. I was afraid I was going to lose a contact. I’ve sweated heavily before but generally some of it evaporates but in this humidity I could have just gotten out of a pool with all my clothes on and no one would have known the difference. I never thought I’d be thankful to run on a treadmill. But compared to my outdoor experience it was an amazing relief! I’ve made the realization that if I want to run year-round here Mr. Treadmill and I are going to have to progress from the relationship we had in Seattle.

When I initially showed Jeff my drawings he said, “Why do all of them look significantly worse in Memphis?” I was like, “Hmm, I didn’t exactly plan it that way…. The BBQ one is definitely better in Memphis!” There’s probably a tendency when experiencing different places or ways of doing things of preferring the old ways by default. I’m trying not to do that. So far, with the exception of running outdoors, I have enjoyed discovering and experiencing many of the differences this part of the country has to offer. Most things, even the bugs, have their pros (lightening bugs in the evening are downright enchanting). So I don’t want to give you the impression that I’m loathing the South or find it inferior to Seattle. It’s just very different – which can be positive, negative, or neutral, or more realistically a complex mix that is highly dependent on attitude. Attitude is everything. I had a gym shirt with that written on it in 6th grade. My friends made fun of me. But it was a really comfortable shirt… Anyway, where was I? No, I guess I don’t really have any more points to make here. Hope you enjoyed this post and my attempts at cartooning, hey, if nothing else I amused myself for awhile (though I am a bit miffed that I forgot tail-lights on the car drawing… maybe I should have briefly referenced an actual car).

View all posts by dmango